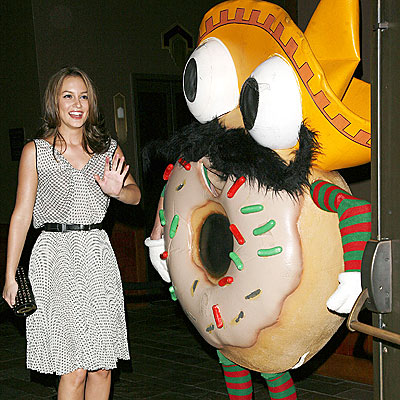 Oooh, two entries in one day! The occasion: the release of Leighton Meester’s new video with R. Thicke, unembeddable thanks to the Dorian Greys over at Universal Music, which I BEEN psyched for. I actually think Leighton has an awesome voice and I can see her music career getting a lot further than yr little sister’s used pile with the Lohan/Duff/J.Lo? jackas. Shout to Olivia Burke. However, all I can think about when watching this video is Robin Thicke’s ALLEGED freaky deaky sex life w/coke and threesomes, the OG McSteamy and Noxema girl up in this piece, particularly when that Paula Patton lookalike shows up grindin next to Leighton. WAIT THAT IS PAULA PATTON. SKEEVY. I love Thicke–interviewed him a couple times, he is totally the shit–but did they not think it would be slightly disturbing that he’s like dad age compared to L and is like all rubbin up on her B-cups. Then again, hot young NY/LA girls dating their dads not exactly media-created mantasy. Is this the new realism? Daps to her for droppin a full-bore cupcake video like this and not fearing her sex tape repercussion, I guess. Actually daps to her publicist for getting that shit out the discourse so fast, you only heard about that for like three days. Back to the video–do ANY of these lyrics make sense to you? It’s almost to the level of throwback spam jibberish. Thicke is all like ‘nobody ever did it quite like this’… okay, standard brag, and then he tops it off with ‘nobody ever did it quite like you.’ Porque? Did your BBM get erased dude? Also, JE T’ADORE. JE T’ADORE. MAKE A MOVE. DO DA THANG. TURN AROUND. STRIKE A POSE. What does it even mean? Do I care? Am I still gonna play this on our radio show? Shit yeah. Leighton Meester and Gossip Girl are hypersexualizing teens, oh wait TEENS HAVE BEEN HYPERSEXUALIZED SINCE THE BEGINNING OF TIME. IF THIS WAS CLAN OF THE CAVE BEAR YOU’DA BEEN WIFED AT AGE SEVEN. FAMILY TIES HAD A CHARACTER NAMED BONER. THEN KIRK CAMERON GOT ALL GODBODY. THIS CHICK GETS TO MAKE OUT WITH ED WESTWICK LIKE EVERY DAY.
Whoever styled this is a BOSS. I know there’s a lotta chatter about the over the knee boot as SKANK 311, but her gold ones w/no pants and bun are sending out mondo chic signals. And L’s preternatural gorgeousness isn’t even afflicted by the elevator scene where her eyebrows look like tarantulas. Is Joan Crawford coming back?

One Response to SELF OBSESSED AND SEXEE