On the Launch of the Computer History Museum

This past January, I was lucky enough to travel to San Francisco to conduct a round of research related to my thesis. The core of the trip was a meeting with Christina Engelbart, Doug Engelbart’s daughter and the co-founder and Executive Director of the Doug Engelbart Institure, the main organization actively working to advance Engelbart’s vision of using digital technology to enhance collective intelligence and a chief upholder of the Augment legacy.

I was put in touch with Christina by Nancy Hechinger, my thesis advisor. With just a brief phone conversation for introduction, Christina was extraordinarily generous with her time. She arranged a meeting for me with Henry Lowood, the curator for History of Science and Technology Collections and Film and Media Collections in the Stanford University Libraries, which has Engelbart’s papers as well as those of many other computer pioneers. She gave me a tour of 333 Ravenswood, the headquarters of SRI, where Engelbart’s Augmentation Research Center had its headquarters when it performed its pioneering work and where the DEI still has its offices today. And last, but definitely not least, she took me along to the grand opening of the Computer History Museum at which she briefly introduced me to her father, which was quite a thrill. In addition to being a surpassingly gracious guide, Christina was also an incredibly articulate spokesperson for the Augment legacy. Talking with her throughout the day greatly deepened my knowledge of the philosophy underlying Engelbart’s intricate and holistic technosocial system.

In some ways, the single most useful part of the trip — at least for advancing my own thinking about my thesis work — was the Computer History Museum itself. Both its successes and its flaws spoke volumes about how best to present this material: what’s most aesthetically interesting about it and what is most easily lost in a traditional museum approach. I’ll spend the rest of this post trying to articulate these successes and failures in a kind of mini-review of the the Museum with a particular eye towards the lessons it might hold for my project.

Even though the museum has been open in different capacities for years, the unveiling of its current show, Revolution: The First 2000 Years of Computing, inaugurates a new era in its history. This installation is more than a single show. It occupies most of the Museum’s permanent installation space and uses all of the most impressive physical materials from its collection. It also encapsulates the museum’s twin curatorial preoccupations: presenting the physicality of computer technology and breaking up the linear progression of technology into thematic interpretive units. For me, the first two of these ambitions came off much more successfully than the second one.

In contemporary life, computer technology seems to have bifurcated into sensuous products and ineffable information. On the one hand we have iPhones and iPads that get described as “lickable” and become foci for almost orgiastic displays of communal commercial lust. On the other we have “architectures of participation” and social networks that encourage subtle but pervasive transformations in our interrelations. The Computer History Museum does a brilliant job telling the pre-history of the physical charisma currently achieved by technology. Where it fails is in trying to get at the intangible side of this same history: how the networks of people and ideas, the social networks and architectures of influence amongst researchers and engineers, lead to technology that the very structure of our world.

The Computer History Museum shows just how charismatic computer hardware can be. Its exhibits are all based around old machines, machines whose physical presence speaks volumes about the worlds their designers imagined.

Take as a case-in-point the museum’s presentation of SAGE, a US military project for tracking and intercepting Soviet aircraft. SAGE was massively expensive, costing more than the Manhattan Project. The Museum has a series of SAGE terminals as well as this stunning model of the entire SAGE complex that was built as part of its design process:

Every exhibit centers around the physical display of some particular hardware system. The design aesthetics of these systems change and evolve over time, almost like works of sculpture arranged to demonstrate the evolution of some particular style or school. 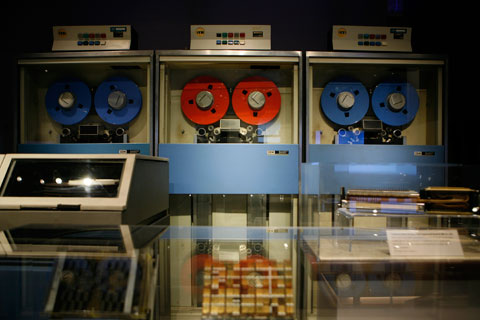 An IBM mainframe from the early 60s.

Further, the Museum actually works to restore some of its hardware to working order, like its the PDP-1 in a prominent place near off the main lobby which has been lovingly repaired and even retrofitted with new controls so visitors can play Space War on it themselves. This use of the hardware serves to defamiliarize computing’s past, reminding us that older computers were not just primitive ancestors of today’s sophisticated machines, but that they actually embodied different social arrangements, different ideas of what technology could be and how it could shape and enhance our lives, even different ideas of what made machines beautiful.

The Computer History Museum’s organizational strategy, on the other hand, is not nearly as effective. Eschewing the obvious linear historical narrative, the Museum opts instead for a series of thematic clusterings: Mastering the Game, Networking and the Web, Input/Output, etc. While the goal of transcending a naive progress narrative is admirable, the result of this particular way of cutting up the apple is to render any sense of historical context or interrelation invisible.

Computing is, maybe more than any other technosocial enterprise, interdisciplinary. Its history cannot be told without touching on government bureaucrats who provided funding, labs that built integrative hardware-software systems, artists who took up cutting edge tools to pursue ancient aesthetic ends, hippies and revolutionaries who fastened on and transformed tools originally invented for military ends.

By splitting up the history of computation into these thematic clusters, the museum renders invisible the figures and movements whose approach was broadest. Figures like JCR Licklider and Bob Taylor at ARPA, whose broad-minded funding strategy profoundly shaped computer research in this country through its most important landmarks in the 60s, their immense contributions nearly disappear when split up in this way.

Similarly, revolutionary researchers like Doug Engelbart and John McCarthy, whose work touched many of the museum’s separate themes — they built input/output devices, they participated in the early stages of ARPAnet, etc. — and who did so out of their own integral visions for what computing could be and mean, their work disappears into a series of brief mentions in isolate exhibits. The actual core of their vision, of Engelbart’s vision of collective intelligence enhancement and bootstrapping, of McCarthy’s vision of Artificial Intelligence, is simply never presented in this schema.

Strangely, the system that best survives the dislocating effect of this curatorial approach is Nolan Bushnell’s Atari. Somehow games are presented as always already integral systems. Or, put another way, they’re not thought of as systems at all, not the sum of a mouse and a networking interface and a display, but unified entertainments that are mostly examined for their pop cultural influence.

While I may be offering criticisms here, I don’t in any way mean to condemn the museum’s work. Even as it stands now, the museum is an impressive achievement. The task being asked of it, to propose a full interpretation a technology which transformed human culture and material life in less than 50 years, is awesome in its scope and ambition. Obviously any initial organization or presentation strategy would necessarily be a first draft of history, to be refined and improved as time goes on and historians emerge with interpretive regimes of greater sophistication that those that currently exist.

As was in impressive evidence the night of the gala opening, while it iss aging, the founding generation of the computer revolution is still very much alive, present, and involved in the creation of this museum. To have already found a fully effective historical perspective in this context would be astonishing.

At this point it must be enough to begin the process: to gather the physical objects, closely observe them, put them near each other, and bring the people together, to see what happens.

History will show up eventually.

This entry was posted in thesis. Bookmark the permalink.

0 Responses to On the Launch of the Computer History Museum