I’ve been watching Star Trek: Deep Space Nine recently for the first time in 20 years. I have vague memories of the pilot from its original airing when I was in middle school, mostly of marveling at its digital effects, which were shocking to see on TV in that era. This time around, however, what hit me was something different: the characters on the show are constantly handing each other iPads. The iPads seem to be the method of choice for delivering reports, important documents, and programs. And this iPad-handing wasn’t just a DS9 phenomenon. It happened across the entire Star Trek franchise at that time. Here’s an example from the 1996 movie Star Trek: First Contact. The overworked Picard’s desk is overflowing with them.

After doing some research, I learned that in the Star Trek universe, these things are called PADDs for Personal Access Display Device. And they’ve actually been around since the original series episode The Man Trap.

Obviously, PADDs are physically very similar to iPads. At first, they seem like another example of Star Trek’s track record as a predictor of futuristic devices. The most famous example of this is the communicators from the original series, which Martin Cooper, inventor of the mobile phone, cited as an inspiration. 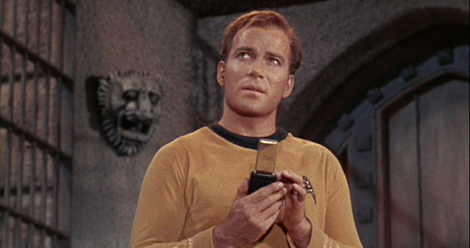 But, as I watched the PADDs circulate around the show, I slowly realize that they’re not actually used like iPads at all. In fact, they’re more like fancy pieces of paper. Individual PADDs correspond to specific documents like the Earth guidebook shown above. To give someone a document, people carry PADDs around and then leave them with the new owner of the document.

Further, the existence of PADDs and incredibly powerful computers seems to have in no way transformed the way citizens of the 24th century consume or distribute culture. A Deep Space Nine episode, The Visitor, centers on Jake Sisko’s career as an author. Here’s what his books look like: If the books are digital documents with digital covers, why do they each have their own piece of hardware? Why don’t individual PADDs store millions of books?

Further, much of the plot of the episode turns on Jake’s success getting published. The publishing industry of the late 24th century seems in no way disrupted or altered by the existence of digital technologies.

From a 2013 point of view, these uses seem completely inside out. Each PADD is bound to an individual document rather than a person or location. This is a universe where its easier to copy physical objects (in a replicator) than digital ones.

After thinking about this a bit I realized the problem: they don’t have the Internet!

During the run of The Next Generation (1987–1994) and Deep Space Nine (1993–1998), the Internet wasn’t part of most people’s lives. The Next Generation averaged 9 or 10 million viewers per season or about 3 times the total number of US Internet users at the time (1.2% of the US population had Internet access in 1991) Hotmail launched on July 4, 1996, two years after The Next Generation went off the air. Google launched in 1998, as Deep Space Nine was winding down. Email, search, and the web itself were only starting to be part of large numbers of peoples lives by the late 90s as DS9 spiraled towards cancellation.

Obviously, the Internet existed before this time and I’d bet a disproportionate number of the writers of TNG and DS9 were on it. But the usage patterns that have emerged with culture-wide adoption weren’t in place yet. And they clearly wen unimagined by Star Trek’s creative team.

The entire communications model on these shows is based on phone calls and radio. Everything is realtime. They have subspace communications, which is basically faster-than-light radio transmission. 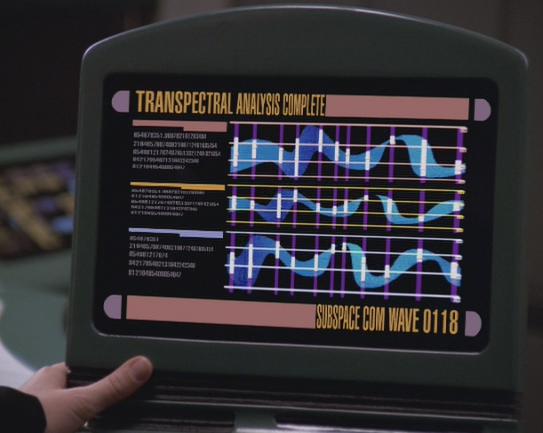 Even those vaunted communicators are basically just fancy CB radios. You have to have a live connection to the other side or you can’t send a message, a device used constantly int the plots of individual episodes.

They use live video chat regularly (as the original series did), presumably over subspace. But they don’t seem to have any forms of remote asynchronous communication or collaboration. They don’t use text messages. Scientists are constantly physically visiting various facilities in order to access their data.

Unlike “subspace communications”, the Internet is not a technique for transmitting information through space, it’s a scheme for organizing its transmission, regardless of medium. As Cory Docotorow has said, the Internet is a “machine for copying”. That’s why the prevalence of these PADDs seems so absurd to a modern eye. In any future that includes the Internet, digital documents will always be more ubiquitous than the physical devices for displaying them. If you have the ability to send the data required to replicate a new PADD to display your document, how much easier must it inevitably be to just send the document where it needed to go in the first place?

In fact, iPads are feasible and desirable exactly because of the patterns of information transmission created by the Internet. We chiefly use them to consume downloaded media, to read from and post to communication networks like Twitter and Facebook, to send and receive email, to browse the web. Without net access, an iPad would be a Newton, a technology whose lifespan coincidentally corresponds almost exactly with the run of TNG and DS9.

Star Trek may have imagined the physical form of the iPad, but they didn’t imagine such a form’s dependence on the much larger and more meaningful change represented by the Internet. Hence, their portrayal of tablet computing ends up looking chiefly decorative in just the way of a lot of science fiction design, reading as “space paper” and “space books” rather than anything truly new.

This brings me back to the topic of my recent post on Thingpunk. The real mistake here, again, is believing that the physical shape of technology is always the futuristic bit, that by predicting the form of devices Star Trek had captured something important about the future. Instead, even in the absence of transporters and replicators, the invisible network that gets those reports and interactive guidebooks onto our PADDs has re-arranged our society in a thousand ways that Star Trek never imagined.